Blogging from LBI ~ Summer of the Sand Dollar 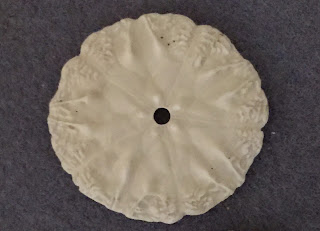 My extended family has been vacationing in the same house on Long Beach Island for twenty years. Our sand bucket is filled to the brim with memories— some, as the summer of my wedding,  the summer of scraped toes, the summer of rusty water, or the one dubbed the summer of fried eggs and hurricanes, are singular memories. Others coalesce like cups of cold water poured into buckets of aged, sun-warmed brine: breakfasting with the gulls... walking the water's edge with my curly-tops... rainy day scrabble or marathon Crack-the-Case games... tables scraped together for breakfast at Uncle Wills... seaside gourmet lunches...festive Fourth of July celebrations...... surf and turf dinners prepared by my sister-in-law Theresa, chef extraordinaire... the list goes on and on...

This year we've been blessed by two full weeks to linger and though we are only at the halfway mark, we've already dubbed this summer, the Summer of the Sand Dollar.

Theresa found the first one and we all marveled at it's fragile beauty. The sand dollar's presence seemed rare and serendipitous, but then, before long, Theresa found another... and another... then I did...and then anyone who went looking seem to come back with at least one delicate star-embossed disk. Google research explained that sand dollars are the exoskeletons of flattened sea creatures who move along the ocean floor on tiny spines and burrow in the sand. A local commenter testily suggested that the proliferation of sand dollars on LBI was probably the result of beach replenishment— we were rebuilding our beaches at the expense of the precious sea creatures who live in the seabed.

The commenter's observation only deepens our appreciation of this year's fragile mementoes. And despite research recasting our wondrous finds as common sea creatures, each sand dollar that we've found remains an exquisite treasure. Though each has singular markings, all bear the same indelible star on their back, a delicate bond to the sea and to the long hours spent hidden in the comfort of their ocean home.

For a week every summer— for two weeks this summer— LBI is our ocean home. And though some summers have distinct markings, every summer is embossed with  the same indelible memory:  long hours spent in the company of family, our anchor in the passing of time and the inevitable changes in each of our lives. 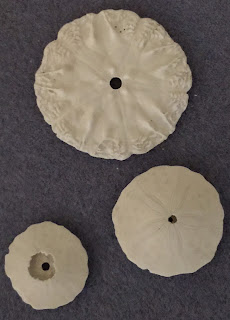 Ann
I’ve been writing since early childhood. My first book, Pomes, (self-published) was bound in brown construction paper and red yarn. A extraordinarily slim volume, Pomes, contained a loving tribute to my baby brother and my favorite doll. Encouraged by the critical acclaim of my parents, aunts and uncles, I continued to write my way through life. Although my world view is larger now, everything I write remains a heartfelt tribute to the world I love.